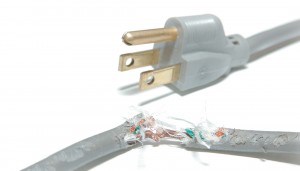 Keeping every member of your family safe around electricity is a priority of Indiana Electric Cooperatives. That includes those furry members of the family — your cat, dog, hamster or other critter.

Once upon a time, there lived a hamster named Oliver who shared a house with his family in the suburbs.

After working out on the exercise wheel in his cage, Oliver noticed a porthole move as he brushed by in one of his tunnels of his hamster city. He turned and found he could easily rotate the door with his front paws and teeth. As he did, the entire door dropped out. He stuck out his nose into the unfamiliar surroundings and slowly wandered off into the darkness. As morning came, he found a bookcase he squeezed behind near his home and went to sleep.

That afternoon, he woke to hunger and looked around. He found a long, brown thing with a soft coating he’d never seen before. He dug his large front teeth into it. He gnawed and gnawed hoping to find a seed or other tasty morsel in the center. But all he got was hard, stringy stuff! Finally, he grew so hungry for real food that he returned to his home where he had stored sunflower seeds. As he made his way to his cage, the people who took care of him were surprised, out of the corner of their eyes, to see him on the floor. They gently placed him back in his home and screwed the door tightly into place, but Oliver didn’t mind. He was home, safe with his food, his soft bedding of saw dust and old socks, and his exercise wheel.

When evening came, Oliver’s family returned to make sure he was OK. A floor lamp stood beside Oliver’s cage. It was plugged into the outlet nearby that was operated by a wall switch at the door. When someone flicked the switch, the lamp didn’t light up as usual. Instead, the sound of hissing and arcing was heard under the bookcase, and the family smelled something burning.  They quickly flicked off the switch and moved the bookcase to see what had happened. There, they found the lamp cord frayed and cut almost in two by Oliver’s teeth.

They all breathed a sigh of relief. Had the cord been electrified when Oliver bit into it, he would have been electrified, too, and dead. And, had they not immediately caught the damage, the frayed cord could have caused a fire that may have caused a lot of damage and even injury or death to the family. This hamster’s new-found freedom almost turned into a nightmare for him and his family. Oliver’s family luckily was able to use the incident to educate themselves about pets and electrical safety.

Here are some tips:

If you come across a pet you believe may have suffered an electric shock, keep in mind your own safety before aiding the animal.