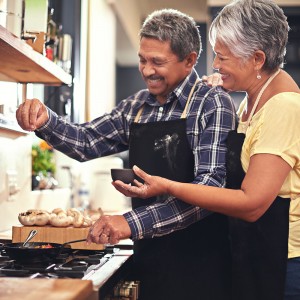 In the mid-1960s, the Beatles jauntily sang about what life would be like “When I’m Sixty-Four.” Now, a half-century later, Paul McCartney and Ringo Starr are in their 70s, and those who are 64 and older are continuing to increase in numbers. In fact, by 2050, one in five Americans could be elderly as the Baby Boom generation enters its twilight years.

U.S. Fire Administration statistics note that approximately 1,000 seniors each year die in fires. That’s why the staff at Indiana Electric Cooperatives is focused on the safety of seniors.

A number of factors increase their risk for danger, including slower reflexes, which may also be impacted by medication, thinner skin, and health issues.

“One of the easiest ways to improve your chances of surviving a fire is to make sure the smoke alarm in your home is working,” VanParis said. “Change the alarm’s batteries twice a year — once in the spring and once in the fall.”

That tip is important for anyone — not just older folks.

The electrical savvy staff at Indiana Electric Cooperatives have other simple tips to keep your favorite senior citizen safe and sound:

Where there’s smoke: How to survive a house fire

Fire among the elderly… by the numbers

What would Halloween be without electricity?

Overhead line safety – when in doubt, look up and out!

Be Safe Around Electricity When Moving Farm Equipment