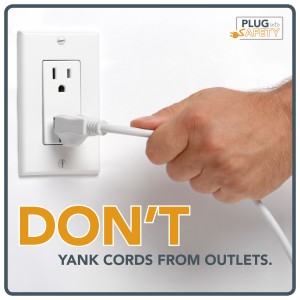 Most teenagers would never consider the morning rush before school life-threatening. There will be those days of drama: remembering a homework assignment due first period, or seeing the tiny zit on their forehead now looks like a third eye — just in time for class picture day.

But amid the occasional drama and the routine rush, some teens truly are living dangerously. They could be risking their safety or the safety of their family without realizing it. Here’s how:

Doing any of these things runs the risk of an electric shock, fire or even death by electrocution. Everyday electrical appliances and gadgets can be dangerous if not treated with respect. All it takes is one careless mistake.

Electricity and water make for an especially lethal combination. Bathrooms and kitchens can be high-risk zones, particularly if you are rushing around trying to hurry out the door. Always make sure you are completely dry before using any electrical equipment or switches and never take electrical appliances like radios, games and chargers into the bathroom.

Outlets in these areas should be protected by ground-fault circuit interrupters. These simple devices can detect a problem at the outlet and will cut off electricity in an instant, protecting against serious injury and burns. While GFCIs should be there, we shouldn’t trust our lives to $10 devices. Everyone needs to practice responsible electrical safety.

Outdoors, teenagers should also remember to never touch lights or electrical gadgets plugged in while they are swimming, wet or standing on wet pavement or grass. Young drivers should understand the dangers of fallen power lines. If they ever leave the road and strike a utility pole, they should stay in the car until an emergency professional or electrical lineworker lets them know it’s safe to get out. Whenever a vehicle strikes a pole, power lines can dislodge from their overhead perch and either fall on the vehicle or drop low enough to be touched. Fallen power lines can still be fully energized and kill anyone who touches them or whatever the power lines might be touching.

“For teenagers coming into their own — allowed to make their own decisions and experience their first tastes of freedom — life is just beginning,” said Tom VanParis, CEO at Indiana Electric Cooperatives. “None of us at IEC want to ever see a life cut short or challenged with a life-altering injury through a careless mistake with electricity. No matter how rushed we all get, we need to keep safety in mind.”

Electrical dos and don’ts for teens at home

When driving to or from the home (or anytime you are in a car):

What would Halloween be without electricity?