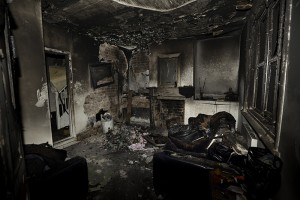 Malfunction of electric appliances, equipment and wiring is a leading cause of home fires. Many electrical fires, however, can be prevented simply by understanding basic electrical principles and following safe practices.

“The statistics are staggering and disturbing,” said Tom VanParis, CEO of Indiana Electric Cooperatives. “There are more than 50,000 home electrical fires each year causing nearly 500 deaths, more than 1,400 injuries, and $1.3 billion in property damage.”

Electrical wiring consists of metal wires that “conduct” or move electricity from place to place, and materials like rubber that “insulate” the conductors and keep electricity from escaping its intended path. Electrical fires stem from circumstances that compromise the separation between conductor and insulator. Among them:

An “arcing fault” results when a conductor’s insulation is compromised. This creates a discharge of electricity between two or more conductors and results in heat, which can further break down a wire’s insulation and trigger an electrical fire. Arc faults can occur when older wires become frayed or cracked, when a nail or screw damages wiring in a wall, or when outlets or circuits are overloaded.

If you experience dimming or flickering lights, unusual buzzing or sizzling sounds, or circuit breakers that trip repeatedly, contact a qualified electrician immediately.

“While it’s important to do all we can to prevent electrical fires, we must also prepare for the worst beforehand,” VanParis said.

Installing smoke detectors is the number one way to proactively keep the home and family safe in case of a fire. Smoke detectors should be installed in every bedroom, outside each sleeping area, and on every level of a home. They should be tested monthly and have their batteries replaced annually, or in accordance with the manufacturer’s instructions. A fire escape plan should also be in place and practiced regularly.

With ample effort put toward preventing electrical fires, and preparations put in place to handle a fire should one occur, property damage, injury and death can be significantly reduced.

Technology that can save lives

Familiarize yourself with your home’s electrical system