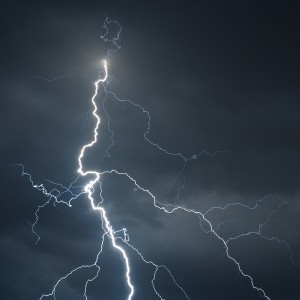 Lightning safety begins when you hear the rumble of the thunder in an impending storm. Growing up, your parents might have told you to count the seconds between the thunder and a strike of lightning to know how far away the storm was.

But, did you know that if your count was under 30 seconds that means the storm is less than six miles away, putting you and others around you in danger? Indiana Electric Cooperatives wants to ensure that you understand the dangers of lightning and how to avoid the risk of death or injury.

“Everyone outside should seek shelter whenever they first see a flash of lightning or feel a rumble of thunder, since both are cues that the storm is close enough for lightning to strike,” said Tom VanParis, CEO of Indiana Electric Cooperatives.

Your cooperative hopes that in the occurrence of storms that members will be able find shelter indoors; but if that is not possible, reduce the risk of being struck by lighting by following these safety rules.

We know that water and electricity do not mix, so if you are caught in a storm while at a pond, lake or pool get out and away from the water as soon as you hear thunder. If you happen to be hiking on a hillside and hear thunder, your first option is to move to lower ground, because lightning bolts will seek out high points on the surface. This also means you do not want to sit under a tree to stay dry. Never seek shelter in a cave or rocky overhang and do not lay flat on the ground. Lastly, place any metal or electrical objects away from you; these include cell phones, GPS units, watches, knives, walking poles, etc.

If you find yourself indoors or have the opportunity to find shelter during a storm, there are still precautions when avoiding the dangers of lightning.

While it might be tempting to sit and watch the storm from your home, stay away from windows and doors. Do not lie on concrete floors or lean against concrete walls, like those found in a basement or garage. Lightning can travel through the metal wires in concrete walls and flooring. Stay off corded phones, computers and other electrical equipment. Again, water and electricity do not mix, so avoid plumbing and water, including bathing or doing laundry.

Following these lightning safety tips can help reduce the risks of danger for you and those around you; but if someone is struck by lightning, they may need immediate medical attention. Lightning victims do not carry an electrical charge and are safe to touch. Call 911 immediately and start CPR if needed.

Myth: A lightning victim is electrified. If you touch them, you will be electrocuted.
Fact: The human body does not store electricity. It is perfectly safe to touch a lightning victim to give them first aid. This is the most chilling of lightning Myths. Imagine if someone died because people were afraid to give CPR!

Myth: If trapped outside and lightning is about to strike, I should lie flat on the ground.
Fact: Lying flat increases your chance of being affected by potentially deadly ground current. If you are caught outside in a thunderstorm, you keep moving toward a safe shelter.

Myth: If outside in a thunderstorm, you should seek shelter under a tree to stay dry.
Fact: Being underneath a tree is the second leading cause of lightning casualties. Better to get wet than fried!

When should activities be stopped?