Indiana’s electric cooperatives applaud today’s announcement at South Central Indiana REMC by Gov. Eric Holcomb that he has allocated $100 million toward rural broadband expansion as part of his Next Level Connections infrastructure plan. 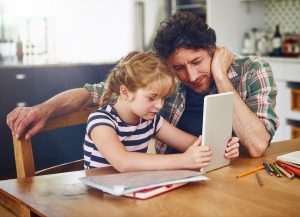 “Over the last two years, Gov. Holcomb and the Indiana General Assembly have taken significant and positive steps to advance the availability of affordable and reliable high-speed internet for all of Indiana,” said Tom VanParis, CEO of Indiana Electric Cooperatives.

“We applaud the governor’s leadership and continued engagement with the electric cooperatives on this important issue,” VanParis continued. “Today’s announcement further demonstrates Gov. Holcomb’s commitment to eliminating the ‘haves and have-nots’ and to reshaping how this vital service is made available to all Hoosiers, regardless of location.”

A study released last week by the Purdue Center for Regional Development and commissioned by Indiana Electric Cooperatives estimates Indiana could gain nearly $12 billion in economic benefits if broadband were deployed in the rural areas of the state. The report further estimates a return of nearly $4 to the local economy for every dollar spent on infrastructure. The study was funded by Co-Bank, a provider of credit and financial services to the nation’s rural energy industry.

“The study clearly shows the return on the investment to the state is significant and justifies a meaningful state investment to support broadband deployment in Indiana,” VanParis said. “The areas of the state that lack affordable and reliable high-speed internet are largely the same as those served by electric cooperatives. Quality broadband service has the ability to alter the landscape and improve the overall economic health, vitality and quality of life in the communities we serve.”

Indiana’s 38 electric cooperatives distribute electricity in 89 of the state’s 92 counties, or about 80 percent of the landmass. South Central Indiana REMC is one of several of Indiana’s electric cooperatives that are offering or have announced plans to offer high-speed internet to their consumers. When internet is unavailable, too slow or too expensive, the impacts are harmful to these economically-disadvantaged areas with already-declining populations. Modern health care, education and economic development depend on affordable and dependable access.