Christenberry, who was previously the association’s director of federal affairs and stakeholder engagement, will lead the association’s government relations efforts, which includes lobbying, political action and grassroots initiatives.

“We are excited to have Brian leading our government relations team,” said John Gasstrom, CEO of Indiana Electric Cooperatives. “Brian has demonstrated an unwavering commitment to our member cooperatives. His positive attitude, impeccable character and sound judgment make him a trusted source with legislators and our members alike.”

Before joining IEC in 2011, Christenberry served as state government affairs consultant with LegisGroup Public Affairs and was also the North Dakota/South Dakota state manager with the National Federation of Independent Business.

An Indiana University graduate with a Bachelor of Arts in political science, Christenberry also pursued graduate-level coursework in business administration at Western Governors University. Christenberry is a past board member of the Government Affairs Society of Indiana and is on the deacon board at Second Presbyterian Church in Indianapolis.

Electric cooperatives encourage consumers to reach out for payment plans

Overhead line safety – when in doubt, look up and out! 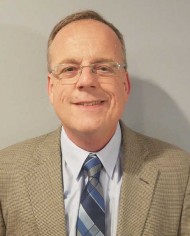