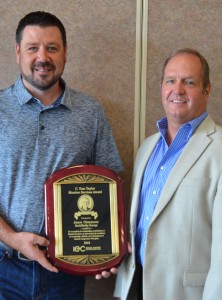 “Jason routinely brings new energy, new ideas and a solid work ethic toward his goals. He is always willing to share his expertise and continually strives for self-improvement,” said Terry Jobe, president and CEO of RushShelby Energy. “He brings those qualities to serve RushShelby Energy every day, which translates to how he interacts with both his co-workers and member consumers.”

In addition to his role at the electric cooperative, Clemmons is active in the Rush County Chamber of Commerce, Partners in Progress, a community improvement organization, and is a youth sports coach.

“Jason conducts his personal and professional life using the very criteria for this award: not for self, but for others,” said Jobe.

The award is presented annually to an Indiana electric cooperative member services employee who has demonstrated excellence in leadership, attitude and commitment to electric cooperative principles. The award is named for the award’s first recipient and longtime Boone REMC member services representative, C. Tom Taylor, who lived by the philosophy of “non sibi, sed aliis” – not for self, but for others.

Electric cooperatives encourage consumers to reach out for payment plans